Were-wyrms are creatures from the Desolation of Mordor DLC of Middle-earth: Shadow of War. They are aggressive predators that cannot be tamed.

Vicious predators, were-wyrms live underground in tunnels beneath the desert landscape of Lithlad. Hunting in great numbers, they await their prey (Orcs, Men, Caragors) before they break through the sand and crush it's victim before eating it.

In Desolation of Mordor, were-wyrms can be encountered in both open-world and story where they attack Baranor, his companions or Sauron's army. The greatest were-wyrm is called by the Orcs: The Rumbler. 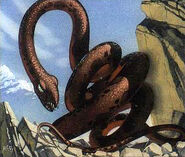 Were-wyrms as seen in The Hobbit: The Battle of the Five Armies

Retrieved from "https://shadowofwar.fandom.com/wiki/Were-wyrms?oldid=65240"
Community content is available under CC-BY-SA unless otherwise noted.