You and your friends are the toughest in Mordor. But, even the most dominant combatants will see a day that they’re bested on the field of battle. For your friends, there’s a good chance that this has already happened. When it does, the Captains of Mordor might set their sights on other players, in other games.

We’re talking, of course, about Vendetta missions in Shadow of Mordor. 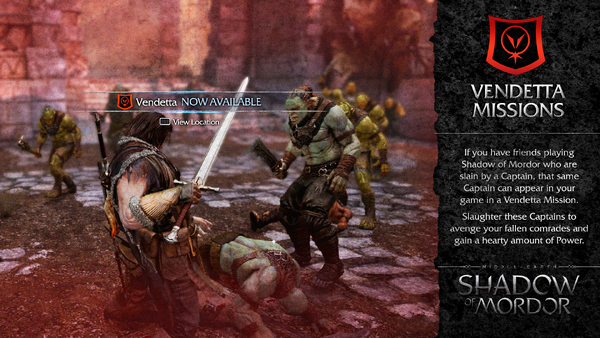 If your PC, PlayStation 4, or Xbox One is connected to the Internet, new missions will automatically appear in your game, granting you a chance to do battle against a Captain or Warchief that’s proved himself powerful enough to take down a fellow player. (Shadow of Mordor will opt to grab a player from your Steam, PlayStation Network, or Xbox LIVE friends list first. If it doesn’t get anyone there, it’ll pull someone in from the community at large.) These Captains will already have a bit of a reputation to precede them. You’ll get some basic information on them, along with a running tally of how many other Rangers he’s been able to mercilessly slay.

Completing a Vendetta mission will net you Power, XP, and a Rune, while the player(s) you avenge will also get some XP of their own. So go forth, keep an eye out for the telltale Vendetta mission icon during your travels, and let your sword speak for you and your fellow fallen Rangers.

Retrieved from "https://shadowofwar.fandom.com/wiki/User_blog:MonolithAndy/Vendettas_and_You:_Avenging_Your_Fallen_Rangers?oldid=45879"
Community content is available under CC-BY-SA unless otherwise noted.