Forming the bulk of Sauron's Army, they are the elite of the species called Orcs, first bred by Morgoth during the time of the Great Darkness in the First Age, and then again by the second Dark Lord Sauron in the Second Age, as well as by his chief servants in the Third Age: the wizard, Saruman, and the Nazgûl use them for their purposes. They are creatures of malice and cruelty, sent by their master to conquer lands, destroy innocence and cause chaos and among the Free Peoples of Middle-earth and Beleriand.

The Uruk is the elite of all the Orc breeds. They are grown in huge vats as a leadership caste and are taller, stronger, better able to withstand daylight, and more ill-tempered than the other lesser Orcs. They are Captains and Commanders, bred for war and determined to take back their homeland for the Dark Lord Sauron.
They impose their will with brute force; they hate beautiful things, will not admit to any fears, revel in slaughter, and enslave any who stand in their path. They are certain their Dark Lord has returned to lead them to their destiny as the rulers of Middle-earth.

The Orcs are bred solely for war, thus the society they have formed and the greatest of this bloodthirsty species, lives by its rules as well.

The Uruk-hai can always be classified by their rank in Orc society:

Uruks can be broadly categorized based on their type of armament and general fighting style, though the Captains and Warchiefs can vary greatly in strength and power level depending on their rank, compared to regular Soldiers:

When a Captain achieves his repuation, often times he must serve a secondary purpose in Orc society, besides warfare. These titles and occupations include:

While creating the Uruks, Monolith wanted to avoid fantasy clichés, and aimed to create realistic Orcs that are more interesting and complex than the typical fantasy archetype. The Orcs in Middle-earth: Shadow of Mordor aren't the typical highly aggressive, unintelligent creatures that they are often portrayed as, but instead are portrayed as exactly what human beings can become when they are driven by fear, domination, and power. Monolith drew a comparison with the Great War, where the situation of Allied soldiers in the trenches are similar to those of the Uruks under Sauron's control. The Uruks are pushed to the extreme, to the point where their society is ruled by power and in-fighting, a society where every Uruk wants to prove their dominance, where the strong can survive only by crushing the weak.

This allows Monolith to push Uruk personalities to the extreme, in turn making them interesting and memorable villains, while also creating a dynamic environment. Monolith drew inspiration from various movies, particularly Quentin Tarantino films, where almost every character is cranked up and taken to an extreme.

A common preconception of Orcs, in The Lord of the Rings, is that they are highly unintelligent, lacking even human-level intellect. While there were only six lines of Uruk dialogue in the entirety of The Lord of the Rings, these lines do show a sense of morality and personal conviction, but they do not live by these words: Uruks will always take the path that leads to glory.[1]

Morgoth created the first Orcs by breeding Elves he had captured and corrupted through torturing and mutilating them. In Lord of the Rings, the Ent Treebeard tells the Hobbits, Merry and Pippin, that Orcs were an attempt by Morgoth to copy the Elves. A similar interpretation of 'Trolls' was made by Treebeard, informing the Hobbits that they were a failed copy of Ents.

Orcs were highly dependent on their leaders in multiple ways. When Morgoth was defeated, the Uruks were confused and easily scattered by their enemies, after which they went into hiding in the Misty Mountains, showing how much they depend on the Dark Lord. Only when Sauron regained power did the Orcs become a considerable threat to Middle-earth. Despite their devotion to their masters, Orcs were treacherous, and would disobey an order out of greed or arrogance.

In the Third Age however, Sauron began to breed the "Uruk-hai" as the elite Orcs to fight in his armies. Uruks were a special breed of Orc, however, they were somehow infused with qualities of Men: they were Man-high and could travel through daylight. In his bid for power, the wizard Saruman made his own "fighting Uruk-hai" to prepare for war with Rohan and to rival Sauron's army. 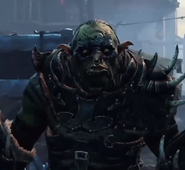 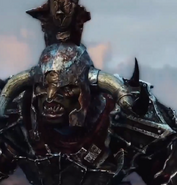 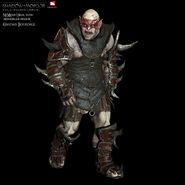 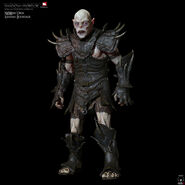 The One Wiki to Rule Them All has an article about:
Orcs
Retrieved from "https://shadowofwar.fandom.com/wiki/Uruks?oldid=65461"
Community content is available under CC-BY-SA unless otherwise noted.