The Dwarf hunter Torvin enjoys stretching a tale to its breaking point, and hunting. He and his brother, Gorvin, left their home in the Orocarni to stalk Middle-earth's greatest prey. The trophies back up some, but not all, of Torvin's magnificent stories. He's often spoken with reverence of an epic brawl with the Mûmakil, and the many Ungol that have died by his battle-worn hands.

Now, Torvin has come to Mordor alone, seeking to bring down the mythical Great White Graug. He is fated, however, to meet the Ranger. He will teach his new ally how to strike terror into the hearts of his enemies by mastering Núrn's deadly beasts.

Torvin hunted with his brother Gorvin. They had gone on many adventures, hunting Graug from Mount Dolmed to Nogrod and even unto Harad where they hunted Mûmak, where they made a trinket out of its tusk detailing their hunt. The brothers then decided to hunt the Legendary Graug, but too great was the beast when they strove against it and Gorvin was slain. This event haunted Torvin, and in turn lead him to decide to track down the Graug for an entire decade, hoping to slay it and avenge his brother.

Prior to meeting Talion, Torvin apparently wed, ending with what is assumed is a broken relationship, tracked a Great Eagle to its eyrie, and lost his dog Silver to a Warg. Torvin would later meet Talion, and after teaching him the basics of the hunt, finds Talion aiding him in defeating the Legendary Graug, finally avenging his brother.

Lord of the Hunt[edit | edit source]

Some time after their slaying of the Graug, Torvin informed Talion that a deadly Warchief clan had arrived in Mordor, seeking to hunt and tame the fierce creatures to support their Dark Lord. He provided basic intelligence on the Beastmaster Warchiefs, and even helped Talion on some of his missions. At the end of this Great Hunt, Torvin bade Talion a fond farewell, and some time later headed to Lithlad.

Sometimes later, Torvin hired some mercenaries to help him search for Númenorian artifacts, all of which died under unknown circumstance. Torvin saves Baranor's life when the latter and his men arrived in Lithlad and attacked by a wyrm, though the others were not as fortunate. Torvin offers Baranor a Numenorian kite, and a device that acts as a shield and also features a grappling hook and crossbow, then sends him in the direction of the Vanishing Sons mercenary band that Baranor was seeking out. Torvin also enlists Baranor's aid in finding a set of Numenorian manuscripts pertaining to the device, giving him sketches of the locations he believes them to be hidden, and offers to engineer any new designs that they may contain. Later on, after Baranor and the Vanishing Sons capture the fortress of Shindram, Torvin is present with Baranor and Serka in witnessing the giant wyre wyrm called the Rumbler destroy the fort after they baited it with a large ammount of Uruk grog, with their intention being to deny Sauron's army the chance to reclaim the fort. 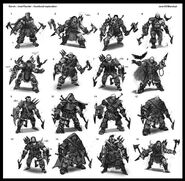 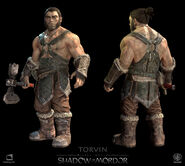 Retrieved from "https://shadowofwar.fandom.com/wiki/Torvin?oldid=66010"
Community content is available under CC-BY-SA unless otherwise noted.