Middle-earth: Shadow of War Wiki
Register
Don't have an account?
Sign In
Advertisement
in: Characters, Nazgûl, Bosses,
and 2 more

Suladân is an antagonist who appears in Middle-earth: Shadow of War. Before his fall, he was a noble Númenorean King who ruled the nation of Harad during the Second Age. During his rule, he sought to go up against Sauron where he led an army of Númenorean soldiers to lay siege on the Dark Lord's fortress in Mordor. Before he sought to engage him, he was surprised that the Dark Lord surrendered and offered a Ring of Power to him. The temptation was too great, and Suladân eventually moved Sauron from the position of enemy to advisor. As Suladân's power grew, so did Sauron's influence over him. He eventually fell completely under the Dark Lord's power to become one of the nine Nazgûl.

In life, Suladân was a leader of a great army as a general from a bygone age. He was most likely the second Numenorean to be ensnared by Sauron.

He successfully led a siege against Sauron's fortress Barad Dur with his great army, though his victory was only brief, as Sauron emerged and surrendered himself. Changing into his fair form of Annatar, the Lord of Gifts, Sauron kneeled before Suladân and offered him a Ring of Power.

Blinded by his greed,Suladân accepted the Ring of Power offered to him by Sauron, ultimately sealing his fate to become a Nazgûl. Sauron was led back to Suladân's domain in chains, but with the Ring slowly exerting its influence over him, the general eventually moved Sauron to become one of his advisers.

Whilst he was able to wield the ring, Suladân raised a great army, though the ring, as well as Sauron, corrupted him, making him isolated and weak as well as stretching his life to an unnatural length. Eventually, even his own men began to question what was happening to their king when they bore witness to him, aged and greatly diminished in his throne room.

Eventually, the Ring of Power Sauron offered him claimed him completely, and Suladân fell into the darkness and became a Nazgûl, enslaved to the dark will of Sauron and the One Ring.

After falling to the Ring and becoming a full-fledged Nazgûl, Suladân became instrumental to Sauron as a military leader in Sauron's campaigns involving his great armies, including during The Last Alliance of Men and elves, where he bore witness to Sauron's defeat at the hands Isildur (another great leader from an age long passed who would later join him in death as a Nazgûl.) Like his Dark Lord, however, Suladân, and Nazgûl brothers were not destroyed and gone for good from Middle-earth, but merely dispersed. Years later he would re-emerge at Dol Guldur, Sauron's old fortress positioned at Mirkwood.

Attempting Seizure of the New Ring[]

After Minas Ithil's capture and transformation into the dark infested city known as Minas Morgul at the hands of the Witch-king, Suladân under orders from the Witch-King, with information gained from their new prize, the Palantír, went to seize Talion and Celebrimbor's newly crafted ring for Sauron.

Travelling to Shelob's cave with all his fellow Nazgûl (except for the Witch-King) Suladân oversaw the attack by the lesser five Nazgûl with two other Ringwraiths who would later be revealed to be Helm Hammerhand and Isildur respectively, before the three also joined the fray in an attempt to force Shelob to give up the New Ring.

Just as Suladân was about to properly engage Shelob however, he and his fellow Nazgûl were interrupted by the sudden arrival and intervention of Talion and Eltariel, the latter of which caused a great explosion of Light using the Light of Galadriel, which promptly forced Suladân and his fellows to flee Shelob's cave, though they all remained intact and able to continue fighting.

Despite the setback at Shelob's cave, Suladân fled to the Witch-King's stronghold and Minas Morgul to recover, though he was not fully diminished. Talion eventually ventured to the city, where he was joined by Eltariel who said she had tracked Suladân thereafter he was driven from Shelob's cave. Eventually, the duo made it to the middle city on the path to the Great Hall where the Palantir was kept, and Suladân descended in response to confront them on the stairs before they could reach the upper city.

Suladân proclaimed the Witch-King had taken possession of Minas Morgul, and would now take possession of Talion as well. Engaging the Ranger and Elf Assassin in combat, the Nazgûl claimed Minas Morgul would not "fall to a handful of cowardly traitors" before robbing Talion and Celebrimbor of the small contingency of followers they had built up as they made their way through the city.

Despite his best efforts, even using dark magic so powerful Talion and Eltariel were briefly forced to take cover in a shield projected by Galadriel's Light, Suladân ultimately lost his fight against Talion, Celebimbor and Eltariel, the former two of which broke and dominated him. Declaring they could not defeat The Nine and would instead join them, Talion and Celebrimbor proceeded to look inside Suladân's mind and saw both the crafting of what would become his Ring of Power by Celebrimbor with Sauron (disguised as Annatar) at his side, as well as the former man's life up until the point he became aged and greatly weakened by the Ring's influence, before their vision ended and Suladân fled.

After being bested by Talion at Minas Morgul, Suladân is not seen again until many years later, when Talion finally fell and joined him in the darkness as a Nazgûl, fulfilling his proclamation that Talion would join the Nine.

Eventually, The One Ring finally resurfaced in the land of Middle-earth known as the Shire, and Suladân alongside his fellow Nazgûl, including the fallen Talion, traveled to this land in pursuit of the new ring-bearer, Frodo Baggins, as well as the eight other members of the Fellowship of the Ring.

Despite him and his fellow Nazgûl's efforts, however, Suladân failed in their quest to reclaim Sauron's Ring, and after it was cast into the Cracks of Doom, Suladan perished with his brothers in the final eruption of Mount Doom, ending his life for good. 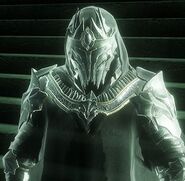 Suladan as a general before he fell to the ring of power.

Suladân as king of Harad

The One Wiki to Rule Them All has an article about:
Suladân
Community content is available under CC-BY-SA unless otherwise noted.
Advertisement