The Uruks for a long time have sought to master and tame the Graugs for the war to come, and when the siege of Minas Ithil began, their efforts were rewarded with a terrifying combination of beast and machine. Called Siege Beasts, these Graugs have been trained to carry a powerful ballista onto their backs operated by a single Uruk.

Siege Beasts have impressive range and many variants exist for there are three types of munitions needed for the battle such as poison, cursed, and fiery. There is a way to disable the living siege machine, by striking at crucial parts that will combust upon impact so the Graugs can be killed, but in no way is it a simple task. A Siege Beast can still fight up close as a Graug and even take on a Drake if one swoops down from above. They are also used in defense of fortresses against enemy armies seeking to conquer them by being placed upon the walls where the high ground shows them favor. 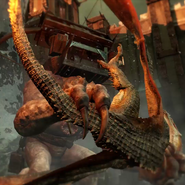 Siege Beast aiming
Add a photo to this gallery
Retrieved from "https://shadowofwar.fandom.com/wiki/Siege_Beast?oldid=65255"
Community content is available under CC-BY-SA unless otherwise noted.