Middle-earth: Shadow of War
Shelob is a giant spider and the daughter of Ungoliant. Mordor was once her homeland, and she was an ally of Sauron before Sauron forced her into the mountains. Her brood still infest portions of Mordor. She still wishes to invade and take back Mordor, and take revenge on Sauron.

Shelob is mentioned in Middle-earth: Shadow of Mordor in two artifacts, the Crushed Spider Egg and the Torn Banner.

Shelob appears in Middle-earth: Shadow of War, and unlike any other incarnation of the character, has the ability to transform into a human woman with black hair and clad in ink-black robes. She also has the ability to fight the Nazgûl physically and can grant visions. She holds great scorn towards Sauron and also distrusts Celebrimbor.

In the Second Age, Shelob had been Sauron's ally and lover prior to him betraying her for an opportunity to corrupt Suladân with a Ring of Power. Surrounded by soldiers, Shelob slaughtered them in rage and retreated to Cirith Ungol, swearing revenge.

After the forging of the New Ring, Shelob has a vision of Talion and Celebrimbor overthrowing and enslaving Sauron before going on to conquer Middle-earth as the Bright Lord. To prevent this vision from coming to pass, she abducts Celebrimbor and forces Talion to relinquish the New Ring to her. She shows Talion visions of Minas Ithil's downfall and transformation into Minas Morgul, sending Gollum — who worships her as the Dark Mistress — to assist him. When Talion fails to prevent Minas Ithil and its palantir from falling into the hands of the Nazgûl, Sauron learns that Shelob has been conspiring against him and sends the Nazgûl to kill her. Shelob is able to hold her own against the wraiths, who are repelled by Talion and Eltariel. Weakened by the battle and Eltariel's Light of Galadriel, Shelob returns the New Ring to Talion and retreats into her lair.

Shelob's efforts to sow mistrust between Talion and Celebrimbor ultimately result in Talion seeing the undead elf for the aspiring tyrant he is, causing Celebrimbor to take the New Ring and possess Eltariel, leaving Talion for dead. Shelob appears to the dying Talion in a vision, revealing her reasons for helping him and urging him to take Isildur's Ring of Power and keep fighting. Shelob observes Talion's decades-long struggle against Sauron's forces and eventual transformation into one of the Nazgûl, prophesying that his actions have bought time for the One Ring to be discovered and for an expedition to destroy it to be launched, ensuring Sauron's ultimate defeat.

When the Ringbearer, Frodo Baggins, approached her lair, Shelob sensed he would ultimately succumb to the One Ring and attacked him in order to hasten his progress to Mt. Doom, where Gollum would unwittingly do what Frodo could not and destroy the One Ring.

Shelob in her humanoid guise. 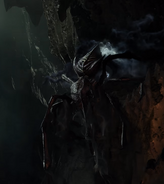 Shelob in her lair.

The One Wiki to Rule Them All has an article about:
Shelob
Community content is available under CC-BY-SA unless otherwise noted.
Advertisement