Middle-earth: Shadow of War Wiki
Register
Don't have an account?
Sign In
Advertisement
in: Characters, Ainur, Inhabitants,
and 3 more
English

“"You will serve ME for all eternity."”

The foremost fallen Maia and a prime firebrand of the evil that plagues Middle-earth, Sauron fell to the ways of rebellion at the dawn of time. Since then he remained one of the main adversaries of the Powers and the Free Peoples as the second Dark Lord, striving to suborn Middle-earth by strength of arms or sheer malice. While Sauron stood, he was feared throughout the land, even to the farthest reaches beyond the Great Sea.

Originally, Sauron had been one of the greatest Maiar, being the most skilled craftsman of the Vala Aüle's people. Though he initially desired order for welfare of the world's inhabitants, the power which he sought to affect his designs became the end in itself and he was ensnared by Morgoth.

In the Wars of Beleriand Sauron had been Morgoth's most-trusted lieutenant, playing a key part in the deeds of his cunning, most notably leading the war against the Elves in his absence and hunting the outlaws of Barahir, in the aftermath of which events led to him being forced to flee his domain for the dark forests until the War of Wrath. Following Morgoth's disastrous defeat, he appeared repentant before the emissary of Manwë. Out of pride, Sauron refused to submit to the judgment of the Valar and prove his good faith through servitude and instead hid in Middle-earth.

After hiding and lying dormant for 500 years, Sauron started to come out again in Second Age. The Men in the in the eastern and southern regions of Middle-earth were tainted by his Shadow, worshipping him as a vengeful god and showing loyalty to his cause. The fell things that still roamed the world, namely Orcs, Trolls and even some of the Dragons became his servants, united by their common hatred of the Free Peoples and reverence of his might. By the year 1000 he established himself in Mordor in eastern Middle-earth, where he started building the Dark Tower of Barad-dûr close to Mount Doom. Taking on the fair guise of Annatar ("Lord of Gifts"), Sauron entered the good graces of the Elves of Eregion and taught them how to fashion the Rings of Power, seemingly to enrich the wealth and prosperity of Middle-earth. In secret, Sauron forged for himself the One Ring to control the other Ring-bearers and bend them to his will.

When at last his plot was known to the Elves, Sauron demanded that they submit to him and yield the Rings of Power. They refused and Sauron openly declared himself, unleashing his great armies that he had until then kept at bay. He managed to conquer most of Middle-earth during the War of the Elves and Sauron, earning him the names of "Dark Lord" and "the Enemy". However, he was defeated in SA 1701 by the Numenoreans, Elves of Lindon and Lorien and Dwarves of Khazad-Dum. Sauron then retreated to Mordor to regroup and strengthen the remainder of his empire. Toward the end of the Second Age, Sauron's boastful title of "King of Men" earned him the ire of the Numenoreans, who came to Middle-earth once more and caused his servants to flee. In his cunningness, Sauron falsely surrendered to King Ar-Pharazon and allowed himself to be brought to Numenor. He rose from prisoner to the King's advisor and puppet master, managing to convince him to invade the Undying Lands which led to Numenor being promptly sunk by the Valar.

Sauron then retreated back to Mordor and began the preparations for his assault. After amassing his armies, the Dark Lord sent his forces against the newly founded kingdom of Gondor. Sauron was finally defeated in SA 3440 in the War of the Last Alliance, with Isildur cutting the One Ring from Sauron's hand. But he was not vanquished for his Ring was not destroyed. Instead, it corrupted the King of Gondor, and thereafter the Ring was known as Isildur's Bane. Sauron retreated to the far East, a shadow of his past glory, much like Morgoth before him. In TA 1000, Sauron grew more powerful and started to rise again, taking the stronghold Dol Goldur in the forest of Mirkwood. He took on the identity of the enigmatic "Necromancer", a dark sorcerer who could summon the dead. His return stirred all evil beings, with the Dragons and the Orcs waging war against the Dwarves in the mountains and the Easterling tribes attacking the Men of the West, while his lieutenant, the Witch-king, established the realm of Angmar to ruin the neighboring kingdom of Arnor. The Maia Olórin (Gandalf) entered the fortress to investigate the dark presence, after which Sauron fled east to evade discovery. The wizard's motives for investigating were that he suspected that the Nine Ringwraiths were being guided by the Dark Lord and that he might secure the Dragon Smaug's allegiance for the coming war.

After entering Dol Guldur for a second time in TA 2850, Gandalf confirmed that the Necromancer was indeed Sauron. The White Council assembled and permanently drove the Dark Lord from Dol Guldur in TA 2941. He returned to Mordor once again, where he announced his presence in TA 2941, when he started preparing himself for a final war against the Free Peoples of Middle-earth. He used the Seeing Stone from Minas Ithil to establish contact with Saruman, compelling him into his service.

In TA 3019, Sauron openly declared himself once more and after interrogating the creature Gollum he learned of the Ring's whereabouts. To this end he sent the Nine Ringwraiths to reclaim his lost possession, but the carefully laid plans of Gandalf prevented this from happening. Further, the early reveal of Saruman's treachery to the White Council forced him to reveal his hand too early. As Sauron slowly sacked the weakened Gondor, he had Saruman move against Rohan so as to prevent the two kingdoms from lending aid to one another. Again his plans were foiled, as his servant and the army in Isengard were defeated by the combined efforts of the Rohirrim and the Ents. To cripple the last hope of Middle-earth, Sauron sent the Witch-king of Angmar to lead the forces of Mordor in an attempt to bring down the kingdom of Gondor by besieging Minas Tirith. The Battle of Pelennor Fields ended with the defeat of the orc army and Angmar's demise. Believing that Aragorn, the heir of Isildur, or Gandalf the White possessed his One Ring, the Dark Lord prepared his forces once again for a final strike, his victory all but assured by his superior hosts. But during the Battle at the Morannon, the hobbits used the distraction to cast the Ring into the fires of Mount Doom. With this, the Dark Tower fell and Sauron was defeated. His spirit was rendered almost a completely impotent spirit of malice and he was forced to follow on Morgoth's steps into the Void- without his will driving them, his servants retreated or were slain and his army disbanded. 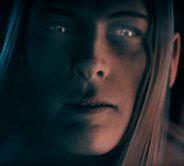 Sauron as Annatar (his fair form).

Sauron as Annatar with Celebrimbor. 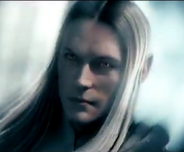 Sauron standing on the slopes of Mount Doom.

The Eye of Sauron in the first trailer for Middle-earth: Shadow of Mordor.

The One Wiki to Rule Them All has an article about:
Sauron
Deutsch Español Français Português do Brasil Русский
Community content is available under CC-BY-SA unless otherwise noted.
Advertisement