Middle-earth: Shadow of War Wiki
Register
Don't have an account?
Sign In
Advertisement
in: Characters, Maiar, Inhabitants,
and 2 more

White Wizard
Chief of the White Council
Lord of Isengard

Middle-earth: Shadow of Mordor (voice and indirectly presence only)

“Together we can be invincible.”

One of the Istari sent to Middle-earth, Saruman's mission was to guide the Free Peoples against the return of Sauron. Lured by the promises of the Dark Lord's devices, the White Wizard turned his back on his old allies. Saruman intends to seize the One Ring, or at the very least reap the rewards of Sauron's triumph as one of his closest lieutenants.

At the beginning, Saruman was one of the Maiar serving Aulë the Smith, being only less skillful than Sauron, who fell into the ways of evil. Volunteering to be an emissary of the Valar in Middle-earth, Saruman was to be the White Wizard - the chief of the Wizards.  Nominally the leader of the White Council that opposed the reemergence of Sauron, Saruman studied the forbidden arts of the Enemy, especially the secrets of Ring-making. No longer he hated Sauron, but instead he feared and envied his power. He also had a strained relationship with fellow Wizard Gandalf, whom he viewed as an intolerable rival who could contest his authority.

With the permission of the Steward, Saruman settled in the tower of Orthanc, faking commitment to the "alliance" protecting the West. While Gandalf actively worked to weaken Sauron's foothold in the North, Saruman searched for the One Ring itself in the Anduin. He consented to an attack upon the fortress of Dol Guldur, suspecting that Sauron was one steap ahead of him.

Saruman appears indirectly and is mentioned in the series, as an outside force that uses guile and trickery to manipulate events in his favor He has his spies and agents, such as nests of Morgai Flies and a few Uruks, to keep an eye on Sauron's doings within Mordor.

Queen Marwen presumably met Saruman in one of his travels in the Grey Mountains. When she returned to Núrn, she carried with her an elixir and through it became susceptible to the will of Saruman. Her possession caused her to wither and make her seem older than she looked. Through Queen Marwen, Saruman spoke and tried to manipulate Talion and Celebrimbor.

In a bid to obtain Celebrimbor’s hidden knowledge of ring making, and possibly discover the whereabouts of the One, Saruman revealed himself and attempted to absorb Celebrimbor into Marwen's magical staff. Talion was stunned while Celebrimbor was ripped from his body, leading Marwen's daughter, Lithariel, to break the staff, freeing both Celebrimbor and Marwen from Saruman's control. As soon as the staff was broken, color returned to Marwen's hair and face, and she grew visibly younger. It did not take long for Celebrimbor to understand that Saruman's ambition was to try become the new Lord of the Rings, of which there can only be one.

From within the fortified walls of Isengard, Saruman plotted his part in the coming war. He began aiding the enemies of the neighboring kingdom of Rohan and establishing an informant network in Eriador to keenly observe affairs in the Shire. Further, he was aware to some degree of the raging battles between the Nazgûl and the Bright Lord, hoping that this ongoing struggle may at the very least weaken both parties. Eventually, Saruman renounced the White Council and came under Sauron's control as his two-faced servant - he no longer opposed the Dark Lord and wanted to benefit from his victory, although he was more than willing to put his hand on the One Ring to supplant his new master.

Much like he did with Queen Marwen years before, Saruman used his sorcery to poison King Théoden of Rohan. Thus he was able to make the kingdom almost fall on its knees to Sauron, weakening the West, as well as allowing him to more easily dispatch his own agents to search for the One Ring on likely routes the Ring-bearer would take. 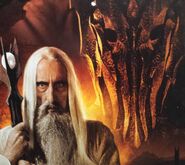 Saruman in thrall to Sauron

The One Wiki to Rule Them All has an article about:
Saruman
Community content is available under CC-BY-SA unless otherwise noted.
Advertisement