Start a Wiki
The Outlaw Tribe is a faction that appears in Middle-earth: Shadow of War added as downloadable content.

"Too long have the warmongering kingdoms of Men threatened Orc-folk. To them, we are mindless hordes, low vermin, and they thirst for our blood, our lands. But a reckoning is coming brothers, for we rise." -- Ratak the Proud

The Outlaw tribe is home to the most rebellious members of the Orc population. They have a deep contempt of 'all those who would rule them, be they foreign invaders or Lords of Mordor (whether Dark or Bright). They are intensely proud and consider themselves members of the ultimate race. The Outlaw tribe envisions Mordor as a sovereign land belonging only to orcs, though their aspirations extend far beyond Mordor and they hunger for the day when they can take their to greater Middle-earth. Other Orcs see them as a rebellious, scrappy, and dangerous tribe who are just as likely to attack invading armies as they are to turn on Sauron and claim Mordor for themselves. They take an opportunity to espouse their message of defiance against foreign races and lesser Orcs.

Outlaw captains often time wear attire and armor that appears to be poorly assembled, makeshift, somewhat living up to their image as rebellious militants.

Their special ability is to throw binding Bolas at their target, be it the Gravewalker or enemy Uruk, and strike the unfortunate victim with whatever means they choose. The attack itself has obvious wind-ups, but the real challenges are that the thrown bola has a relatively wide hitbox compared to most other projectiles. The whole attack is executed at a deceptively slow speed, quite possibly making inexperienced players used to the pacing and range of bolts and spears to panic and dodge too fast at the wrong direction and get bound anyway. The bolas however, don't do much damage by themselves.

Regions under control of the tribe will have their camps and outpost look rather unkempt, with roughly built attachments made out of tent cloth and wood helming most buildings. The local fortress will also have an atmosphere akin to a rebel camp. 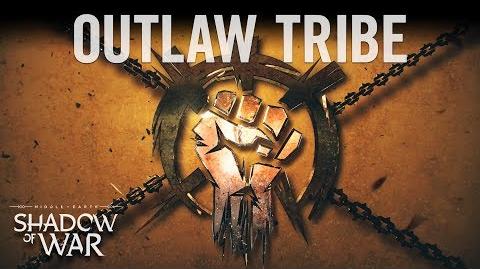