Start a Wiki
watch 01:03
Official 'Shadow of War: Marauder Tribe' Trailer
Do you like this video?

The Marauder Tribe is a faction that appears in Middle-earth: Shadow of War.

"We welcome you to this fortress! Your bodies will litter its approach; your valuables will fill its halls! And we will toast the Dark Lord's terrible power with grog sweetened by your blood!" -- Snagog the Golden

For the Marauder Tribe, battles are just a prelude to the real action: plunder and feasting. This tribe utterly sacks whatever they conquer, leaving only splinters and bones behind. Other Orc tribes gripe that the Marauders are more greedy than they are fearsome, even as they envy the riches the Marauders have earned by plundering others.

Uruks of the Marauder Tribe are easily distinguished by their relatively vain gold-patched gear.

The Marauder's special attack is to rapidly fire multiple bolts shot from two crossbows, each hand holding one. All Marauder Uruks, even those of melee fighter classes, have these twin crossbows. While the attack is very telegraphed and does not do much damage with each bolts, they can be rather annoying as they can easily break hit streaks and make Talion flinch in the most detrimental moment.

Regions under control by Marauder Fortresses will exhibit a proportionately lavish outlook, with shining plunders and loot being stashed and racked around structures. Some of these loot piles can be collected for Mirian. 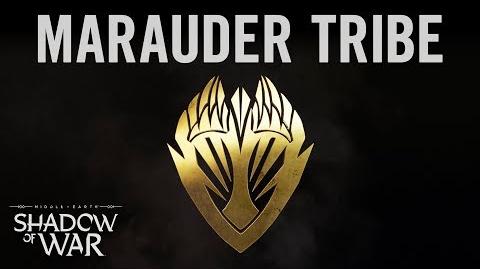 Official Shadow of War Marauder Tribe Trailer
Add a photo to this gallery
Retrieved from "https://shadowofwar.fandom.com/wiki/Marauder_Tribe?oldid=65673"
Community content is available under CC-BY-SA unless otherwise noted.