Talion's wife and mother to their son

Ioreth is a character in Middle-earth: Shadow of Mordor and Talion's wife. She dies at the hands of the Black Hand at the beginning of the game.

Prior to the events of the game, Ioreth lived in Minas Tirith. There she was attacked by Asgon, a nobleman, but her husband Talion slew him. According to the laws of the kingdom Talion's life was forfeit to Gondor, despite Ioreth's pleadings to her father Hallas. It was not until Ioreth revealed to her father that she was pregnant with Talion's child that Hallas relented. Having pity for his daughter, Hallas accepted the offer that was given to him to command the Rangers of the Black Gate and brought Talion and Ioreth there. She later bore her son there.

She was an intelligent, practical woman accustomed to living among the Black Gate's austere conditions. Her focus was the welfare of her family and the rest of the garrison, all of whom she knew as friends. Her son becoming a Ranger was bittersweet to her. While proud to have raised a Ranger of Gondor, she mourned the “days of peace” she and her husband once planned to spend far from the gate once his days of duty were done such as Rohan or Esgaroth.

At the start of the game, she and Dirhael were killed in front of Talion, setting him off on his quest for vengeance. Ioreth told Talion that they would be together in death prior to being killed, though that has now since become impossible after Talion became a wraith.

At the start of the second game, Ioreth appears again as she hums and Talion gives her flowers, just like the first game. She says that the past is the past, and disappears. 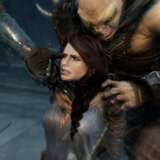 The Black Hand about to kill Ioreth.