The Outcasts of Udûn

Hirgon served the Rangers faithfully, but fell in love with an Outcast woman, Eryn, and deserted, risking execution for leaving his post. Love prevailed; the two were married, and Hirgon lived among the Outcasts, people who feared and hated his kind.

When the Uruks invaded Udûn, Hirgon's skills proved invaluable and the Outcasts often deferred to his experience. He was unable to stop his beloved wife from being captured by the Uruks and seeks desperately to rescue her. 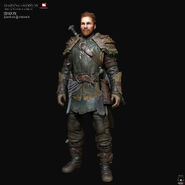