“Where was your bravery, when we bled your wife and gutted your son? Kill him!”

The Hammer of Sauron is the tertiary antagonist in Middle-earth: Shadow of Mordor. He was one of Sauron's Black Captains and was responsible, partly, for the murder of Talion and his family during the retaking of Mordor by the Dark Forces. Known for his downright ferocity on the battlefield, he used Sauron's demonic mace to crush a bloody path through his enemies. He represented Sauron's warrior nature and martial prowess. He ultimately met his demise at the hands of Talion, being defeated in combat after Talion had killed the Warchiefs of Udûn.

The Hammer of Sauron was a stretcher bearer during the War of the Last Alliance, who grew disillusioned and became seduced by Sauron's power after he came upon the Dark Lord's mace which had been dropped after Isildur defeated him. After that the Hammer realized that his life in helping wounded soldiers looking to find glory in war was wasted and thought that if they were so desperate to find glory on the battlefield then he would be more than happy to give it to them .[1] Sometime after this epiphany, he joined a triumvirate consisting of himself, the Tower of Sauron and the Black Hand of Sauron. They became collectively known as the Black Captains.

The Retaking of Mordor

Shortly after Sauron's defeat at the hands of the White Council, his eye turned to reclaiming the Land of Shadow. Amassing their combined forces, his three servants led the assault on the Black Gate with their Uruk army. The Rangers manning the Gate were taken by surprise and slaughtered to the last man that night.

Amid the blood and ash, a lone Ranger and his family survived most of the onslaught. The Hammer and the Tower cornered Talion and his wife under directive of the Black Hand. The Hammer personally subdued Talion from behind and proceeded to beat him within an inch of his life, also scarring the Ranger's left hand. Only the Tower interfering stopped him from killing Talion outright, thus he compromised with an offhand blow to the head, rendering the Ranger unconscious. The Captains then brought their sacrifices to the Black Hand. The Hammer held Talion down forcefully as the Black Hand invoked the spirit of an elf lord by completing a blood rite, killing both of the Ranger's kin before murdering the Ranger himself.

The three Captains began a methodical sack of Mordor, installing warchiefs to rule over the region and strengthening The Dark Lord's grip on the land. The Hammer kept discipline in the Uruks through fear along with his fellow Captains.

Duel with the Gravewalker

“Now, bring me the head of this Gravewalker!”

— The Hammer of Sauron

“Claim the head yourself.”

Not long after the invasion of Mordor, things began to turn sour for the Uruks of Udûn. Several of the local Warchiefs had perished, causing confusion and discord in their ranks. Stories of a supernatural threat called the Gravewalker began to circulate, bringing death with it. Yet the Captains did not intervene until the Gorthaur, a giant monument to the Dark Lord under construction, was destroyed by this new relentless enemy. The Hammer arrived in Udûn to deal with this act of sacrilege. Furious, he demanded answers from the warchiefs, only to find only one left alive, a sniveling coward named Ratbag the Coward. Ratbag the Coward's timid explanation of their demise earned him a sarcastic compliment from the Captain. His patience spent, the Hammer promptly struck Ratbag the Coward with a vicious strike from his mace for not answering his duties to kill the ranger, before commanding the head of the Gravewalker was brought to him. At that moment, Talion revealed himself and challenged the Hammer to kill him personally.

The Hammer expressed amazement that the very same Ranger they'd made an offering of was the undead horror that plagued Udûn. He taunted Talion for being unable to defend himself and his family before ordering his Uruks to attack. Despite being outnumbered, the Ranger fended off everyone, forcing the Captain to involve himself in the melee.

After a fierce duel, despite all the powers Sauron had gifted him with, the Hammer was defeated. In his final moments, he mocked Talion's quest for vengeance and claimed that the darkness Talion sought to destroy had already seduced him. Despite a attempt to hit him with the mace, Talion bypassed the Captain's guard, slit his throat, and stabbed Acharn deep into the Hammer's neck. The Hammer fell dead at Talion's feet, his tyranny finally ended.

“How does your vengeance taste, Talion? Is not the darkness sweet?”

The Hammer may had once been a kinder individual, acting as a stretcher bearer and tending to the wounded. However, discovering Sauron's mace transformed him into a peerless and sadistic warrior as well as a ruthless commander. The Hammer became an avatar for Sauron's military ability and bloodlust. He was brutal and without empathy; as seen when he beat Talion to near death for enjoyment, only stopping when the Tower reminded him of the ritual. Even then he continued, scarring the Ranger and knocking him unconscious.

He was fanatically loyal to the Dark Lord, showing fury at the destruction of his master's edifice, decrying it as sacrilegious. He also showed no tolerance for failure, executing Orcs the instant they displeased him, as in Ratbag's case. His disdain for his subordinates was in no way hidden, calling them filth, swine and useless.

The Hammer prided himself in his fighting skills, taunting Talion during their fight and proclaiming to teach his warriors "the art of the kill." The Hammer proved to be worthy of his title, wielding Sauron's mace with cruel efficiency and channeling his lust for battle and spreading pain among those who earned his ire.

The Hammer was once a man, a stretcher bearer for Gondor dedicated to retrieving the wounded. His life changed on the slopes of Mount Doom when he retrieved Sauron's mace after the Dark Lord fell.

When he took up the weapon of Sauron he realized that his life had been wasted in saving others who sought glory in war. If Men wished to die gloriously in battle, he would grant their wish with pleasure.

He became doomed to a bloodlust that would never be sated. He has waited millennia for the Dark Lord's return to Mordor and now his purpose has been revealed to him. 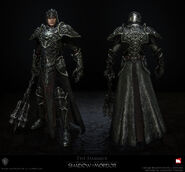 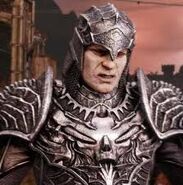