The Great Beast is a type of creature mentioned Middle-earth: Shadow of Mordor. They do not appear in the game.

A monster of this strength and size can, without reservation, be referred to as a great beast. A distant cousin to the Mûmakil, these enormous quadrupeds can grow to thirty-five feet tall and make unrivaled beasts of burden for the Dark Lord's armies.
They are powerful enough that no creature, except perhaps for a Graug or a huge Caragor pack, can hope to bring them down.
In the coming war, they will prove invaluable to the Dark Lord's growing armies as both transport and a weapon. 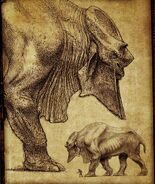 A great best wandering in Udun

The Great Beasts in The Return of the King

A toy great beast
Add a photo to this gallery
Retrieved from "https://shadowofwar.fandom.com/wiki/Great_Beasts?oldid=64022"
Community content is available under CC-BY-SA unless otherwise noted.