Drakes are mountable creatures that appear in Middle-earth: Shadow of War.

The drakes of Mordor are a breed created by Sauron; drakes are infertile, dragon-fellbeast cross hybridized by the Dark Lord in the pits of Barad-dûr. While much smaller and less intelligent than their "greater" forebears (such as Smaug the Golden, Glaurung and Ancalagon the Black), they retain the ability to breath fire and can prove a powerful force on the battlefield. The individual utilized by Witch-king of Angmar breathes flames which are blue and sickly green in coloration, somewhat akin to the aura of Minas Morgul. (This may have been the result of the Witch-king's foul magic.)

Drakes are fearsome predators whose favorite prey include Great Eagles that strayed into the lands of Mordor, and they are adept scavengers having no qualms against scraping a meal off the ground if need be. Drakes are also cunning and stubborn; so much so that taming them is almost impossible without aid of magic. Although some of orcs try to tame them, others pay attention so as not to leave carrion out under the open sky and attract drakes that will seek fresh prey after finishing their first meal.

Even though drakes were created by Sauron and inhabit lands of Mordor, they are not among his most obedient servants much like the greater Dragons, given their tendency to fire indiscrimately upon Orcs or even feeding on them. Many drakes are used as siege beasts by the Dark Lord's forces, being locked in wooden wolf-headed cages that act as living flamethrowers defending the gates of fortresses. Once they are freed, they tend to attack anything nearby, be it their rescuer or nearby orcs.

Carnan, the forest god, has the ability to transform into an elemental drake, as she did during her fight alongside Talion and Celebrimbor against Tar Goroth and during her attack on Zog's resurrection ritual after Talion kills him for the last time.

Like many of the other beasts of Mordor, Talion and Celebrimbor can dominate and ride drakes after wearing their health down to a certain point.

Drakes can not only fly, but also posses the ability breathe two types of fire: a stream of flame that can burn enemies upon the ground, and a charged fireball that explodes like a bomb upon impact.

They can also attack graugs, though they are just as likely to survive the encounter as their victim. While flying, Talion can use a dive attack to grab orcs and Olog-hai from the ground. Another use for the drakes is as a flamethrower, trapping them in cages and forcing them to breath fire upon attackers as they try to breach the gates.

Drake in the sky 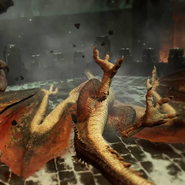 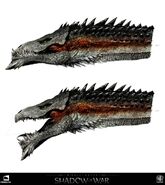 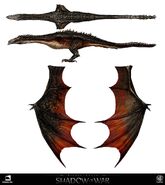 Drake Concept art
Add a photo to this gallery

Retrieved from "https://shadowofwar.fandom.com/wiki/Drakes?oldid=65437"
Community content is available under CC-BY-SA unless otherwise noted.