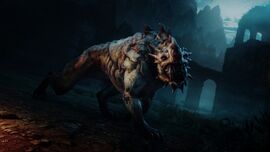 "The Caragor (Sindarin for "Row of Teeth" and "Bringer of Fear") is the ultimate predator within Mordor, having driven every rival species from Wargs to Lions into extinction within their territory. Like the Lion, this enormous hunter lords over Mordor, striking terror into even the Graugs and Great Beasts of Lithlad Plains."

Since the return of the Dark Lord to Mordor, a more powerful and savage species of Caragor has appeared. These "Dire Caragor" are easily recognized by their pale coloration and superior cunning. Many Uruk Beastmasters who seek to gain hierarchical status by hunting, exterminating, or enslaving the beasts of Núrn, have ended their days in the jaws of these fearsome creatures.

Dire Caragors resemble their lesser counterparts in appearance, but can be easily distinguished by a pale white pigmentation of the skin. They have more armor, and a health bar is always displayed above them (similar to a Graug) However, in Shadow of War, all caragors, dire or normal, have health bars that you can see. In the Wraith world, they can be quickly identified due to the red aura as opposed to the usual blue of lesser Caragors.

Finding a Dire Caragor is a rare occurrence, as they tend to avoid hunting in the open with other Caragor.

Retrieved from "https://shadowofwar.fandom.com/wiki/Dire_Caragors?oldid=64795"
Community content is available under CC-BY-SA unless otherwise noted.