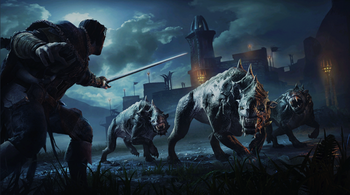 Terrifying creatures of the Hunt, the Caragor prowls the landscape of Mordor, searching for prey to feast upon. They, more often than not, travel in packs to take down larger prey, like Graug, or a large pack of enemies, like Uruk Hunters. They can also be found in cages, usually within Strongholds. Caged Caragors can be set free by shooting the lock on the cage (or hitting it with the Sword). Caragors can also be lured by shooting Caragor bait.

In Middle-earth: Shadow of War, Caragors are used as war beasts and cavalry mounts by the Uruks and Ologs, with some Uruk captains having Dire Caragors for mounts.

Caragors attack with uncounterable attacks, which require Talion to dodge them. They can overpower any common Uruk in close combat, provided the mauling of their victim isn't interrupted.

Talion is able to use his Wraith abilities to dominate Caragors, forcing them to fight with him, providing him with valuable but unpredictable allies.

Dominating Caragors mounts them, enabling Talion to ride them, granting increased movement and climbing speed. In addition, Talion can still use his Sword and Bow from the back of the beast and can also instruct it to maul enemies, restoring the health of his mount on success. Talion can also perform a combat-leap from the back of his Caragor, which is lethal to all common enemies. Upon dismounting a Caragor, it will remain friendly towards Talion, fighting at his side. It can also be re-mounted at will. Riding a Caragor does not prevent it from triggering fear or hate in Uruk Nemeses.

In some rare instances, Talion may encounter a Dire Caragor. They act as the leaders of a small Caragor packs. The only difference between dominating a Dire Caragor and a regular one is that the QTE circle is smaller. When mounting a Dire Caragor, nearby Caragors will follow Talion and aid him in combat. Other dominated Caragors, however, will not follow a Dire, so if you want a small army of these beasts only dominate the Dire.

The common Caragor is vicious, digusting, and a relentless killing machine. It is native to Mordor, and the realm's top predator.

Their powerful legs make them excellent sprinters and fair climbers. Their jaws are powerful enough to snap through bones and cut through all manner of armor. They attack and kill and competing predator, such as Wargs, on sight.

Orcs have begun to capture and cage these animals, although their attempts to domesticate them as cavalry mounts have been largely unsuccessful. The Caragor has proven remarkably stubborn and resistant to training.

"I saw the whites of the Caragor's eyes. I smelled its breath, felt its teeth in my neck." -- Tuhorn the Climber

Mordor's fiercest hunters, Caragors prowl in small packs, seeking everything from Orcs to Graugs to consume. They prefer to pounce on their enemies, then clamp down with a bite from their massive jaws. worrying their prey like a ragdoll until dead.

Caragors are also fast runners and adept climbers, capable of scaling sheet cliffs in search of prey. Almost suicidally brave, they rarely leave combat until they or their prey are dead.

Some Orcs capture Caragors and attempt to train them for war, but Caragors are ill-tempered enough to make the attempt dangerous for even the bravest Uruk. Still, occasionally an Orc will succeed through luck, guile, or sheer determination.

Retrieved from "https://shadowofwar.fandom.com/wiki/Caragors?oldid=65303"
Community content is available under CC-BY-SA unless otherwise noted.