Caragaths are a subspecies of Caragor encountered in the Lord of the Hunt downloadable content.

Caragaths are described as being stealthy, allowing Talion to attack from the shadows when mounted upon one.

When mounted on a Caragath, stealth kills are also possible, though are only for even and above ground elimination. However, they do not possess any stealth kill that behaves similarly to Brutalize.

Like Caragors, Caragaths can be found wandering in packs, in cages, or lured by bait. In addition to these encounters, non-hostile Caragaths can also be found following an Uruk that has likely subdued them. Caragaths encountered this way are non-hostile towards all Uruks, but will become hostile as soon as a fight begins. 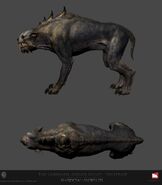 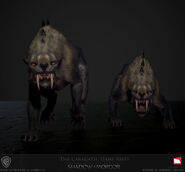 Retrieved from "https://shadowofwar.fandom.com/wiki/Caragaths?oldid=64793"
Community content is available under CC-BY-SA unless otherwise noted.