Leader of the Black Captains

The Black Hand of Sauron, or simply known as the Black Hand, is the main antagonist in Middle-earth: Shadow of Mordor.

Many rumors and stories circulate about the origins of the one who would become the Black Hand of Sauron; some tell he was a king of the East who brought the heads of the two Blue Wizards as fealty to Sauron - others that he was at his side since the Downfall of Númenór.  What is certain is that he is the represetantion of Sauron's manipulation and deceit, the most powerful among the Black Captains, and that he commands them with unwavering loyalty to his master.

Upon Sauron's return to Mordor, the Black Hand led the retaking of the Land of Shadow, personally overseeing the capture of the Black Gate. Assisted by his peers, he sacrificed Talion's family, both his wife Ioreth and his son Dirhael in a ritual meant to summon the spirit of the Elf-lord Celebrimbor.  Through his inner circle of Warchiefs, the Black Hand of Sauron looms Mordor from the safety of his fortress, protected by his bodyguards, known as the Talons. The endeavours of Talion and Celebrimbor have not, however, escaped the notice of the Black Hand, warranting investigation by the Hammer of Sauron at the remains of the Gorthaur.

Following the death of the Hammer and the formation of the Gravewalker's army within the Uruk ranks, the Black Hand went to search for Talion and Celebrimbor in Núrnen, leaving the Tower of Sauron behind. His arrival there has had no results, other than reducing the place to smoking ruins as a warning to the Gravewalker.

After the Gravewalker's forces stormed the Black Gate and the Talons were "cut", the Black Hand patiently awaited Talion and Celebrimbor to confront him at the top of the towering fortification. Restoring the Elf-lord's last memories to him, the Black Hand vowed to seal himself and Talion in death, slitting his own throat in the process. This drew Celebrimbor from the mortal's body and briefly allowed Sauron to (partially) manifest phisically by absorbing the Elven spirit. The "reborn" Dark Lord attempted to crush Talion with his mace, but was eventually held back by Celebrimbor and wounded by the former. As the Gravewalker and Elf-lord merged once more, Sauron could only flee, leaving the Black Hand's lifeless body on the cold stone-walkway, and Talion's family finally avenged.

The Black Hand of Sauron is the greatest and most feared of the Black Captains. His mere presence spreads terror to all on the battlefield, be they foes or servants.

Some say he was once a king from the east who brought Sauron the heads of the two blue Istari as gifts. Others say that he returned across the seas with Sauron after the fall of Númenor. Still others claim that he is the Dark Lord himself, taking fair form once again within Mordor.

There are many stories of his origins. All of them are lies. The only things which are certain are that he is a master of deceit, and that he serves his Dark lord with absolute loyalty. 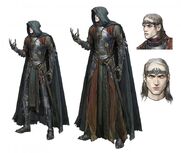 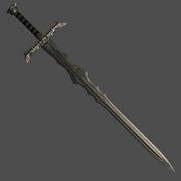