The Black Captains are the main antagonists in Middle-earth: Shadow of Mordor. Each represents a side of Sauron, the Black Hand of Sauron is that of lying, deceit and manipulation, the Tower of Sauron is the horror and viciousness of Sauron and the Hammer of Sauron is power and might. They are among the highest ranking members of Sauron's forces, answering only to the Dark Lord himself. Formerly men, they have been corrupted and transformed into beings of sheer evil and malevolence and are bound by their absolute loyalty to the Dark Lord. 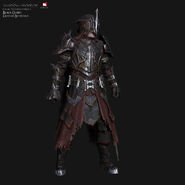