Barad-dûr, also known as the Dark Tower, is a possible location in Middle-earth: Shadow of Mordor. This fortress-tower was Sauron's primary stronghold in Middle-earth and Mordor. The building itself is the tallest tower to ever be built in Middle-earth, being over 1,400 meters tall, from top to bottom.

Barad-dûr was built close to the volcano called Mount Doom in the land of Mordor by order of Sauron. Its construction began somewhere around the year SA 1000, and it took nearly six hundred years to complete. Much of Sauron's personal power went into the fortress, turning it into the greatest fortress ever to be built.

At the end of the Second Age it was leveled after Sauron's defeat at the hands of the Last Alliance of Elves and Men. Its foundations, which were created using the One Ring, remained intact and no force could destroy it. Thousands of years later the fortress was re-built after Isildur chose not to destroy the Ring.

Beside its size and immense strength, Tolkien did not describe the fortress in detail. As it had a "topmost tower" with the Window of the Eye, it can be assumed that Barad-dûr had multiple towers. Tolkien also described it as being surrounded in shadow, making it difficult to see the structure. There were several giant caverns known as "Pits" below the immense structure, which may have been used as prisons.

The gates of Barad-dûr.

Barad-dûr with Mount Doom in the distance.

The top of the tower with the Eye of Sauron.

Barad-dûr in the first trailer of Middle-earth: Shadow of Mordor. 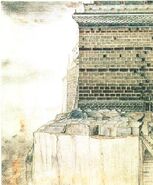 A sketch by Tolkien.

The One Wiki to Rule Them All has an article about:
Barad-dûr